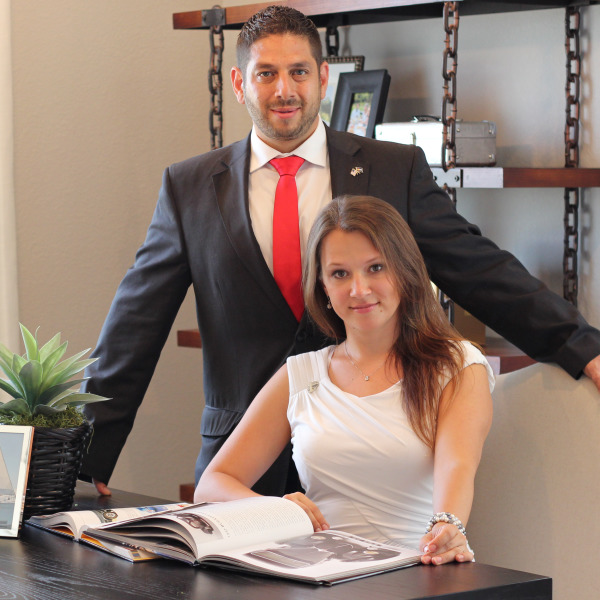 Realtor/ Broker Owner & Managing Partner RE/MAX Structure
Brandon Rossell – REALTOR/Managing Partner
Working in the Real Estate Industry since 1999, my diversified experience consists of: Digging ditches as a laborer, Leasing, Development, Property management, Condo conversions, Acquisitions, New builds, Flipping distressed properties, Foreclosures, Selling some of the most economical of homes to the most luxurious real estate, Training others in our professional community, Teaching, HOA's, Public Speaking in front of an international crowd at our RE/MAX Corporate Office ( But wait, There's More!). To say the least, I've had a comprehensive involvement with plenty more experiences on the horizon.

Lana Kuznetsova – Broker Owner
Started in Real Estate in 2007, was working by Brandon side since then. Taking pride in professionalism and negotiating skills. I enjoy educating, negotiating and being challenged. My objective is to give my clients the best experience possible. To take a very complicated, emotional process and make a fun adventure as they build on their future and reach another goal of achieving comfort. After all, building relationships is the key to my business and how I support my family.

Positive: Professionalism, Quality, Responsiveness, Value
Lana and Brandon are wonderful!
From the very first time I’ve met them I could tell how much they care about their clients needs and how passionate they are about what they do. Selling a house and buying a new one can be a pretty stressful process but Lana and Brandon made it as seamless as possible. I always felt they had my best interest at heart to get the deal done.
They are patient, professional, honest, knowledgable and very comfortable to work with. Highly recommend them!

Positive: Professionalism, Quality, Responsiveness, Value
Brandon has given my wife and I great advice and encouragement while guiding us through selling our home and buying a new one. His reality based experience and words of real estate wisdom helped us through the anxious times and the happy times selling and buying a home brings. He has gone above and beyond to fight for us to make things happen. We are thankful we chose him to represent and council us and grateful for his tireless work on our behalf.

Brandon and Lana are extremely professional, knowledgeable, and personable. They gave us incredible service and helped us find the perfect home for our needs. I will never buy or sell a house without Brandon and Lana after this awesome experience.

Simply an amazing team. Super professional and Brandon goes above and beyond to help you with anything you need through the entire process.

Working with Lana was a dream! She made everything so easy for us as first-time home buyers. She sent great options, kept in touch often, and gave us really great advice that ultimately led to us getting our dream house! We're so lucky to have found her.

Robert Kiyosaki, the author of “Rich Dad Poor Dad” has advised to “hire someone to run the business or market & sell the product for them”. Hire someone who knows the business. If you want your house sold or you want to purchase a house you want a pro to do it. Brandon, Lana, and Alex are the dream team to get it done. They’ve been doing this for a while and their history shows that they take care of their clients. I know Lana and Brandon will catch any issues before anyone else. With their extended experience and negotiation skills they know how to deal with difficult situations while making you feel at ease. Alex has the knowledge and the skills to get you the best rate for your financing. I couldn’t be happier with this team!

Positive: Professionalism, Quality, Responsiveness, Value
Working with Brandon was everything I could have hoped for as a first time home buyer. He made sure I was educated on every decision I made, and that was so important to me. His wisdom in real estate and kind heart was priceless during this process. Even still he continues to provide support and guidance, a one stop shop with these two

Loved working with Lana during the process of purchasing our home! I consider her a "bulldog" in the real estate industry. She took amazing care of us!
2

Great team — very happy with the service and support!!

Brandon & Lana are the absolute best! Very professional and get the job done the right way. Wouldn’t want to work with anyone else!

Brandon and Lana are awesome! They are kind and driven to get the best results. Much appreciation

What a great team, they helped out through the entire process, and even lent an ear on a bad day. Remember the Packers!

I had a really complicated move at a complicated time. I was working with Brandon as my realtor for the sale of my first home, and another realtor out of state. Not the mention the lawyers and mortgage people. And it's all during the pandemic.

Of everybody I dealt with in all of my transactions, Brandon was the clearest and most communicative. He understood the market and he used some legitimate psychology. He was ethical and put much more time into explaining paperwork than the other realtors I've worked with before. I didn't have to call him up as ask "why is THIS on here??" because we always walked through it.

I had actually tried to sell my house a year before. Non-pandemic, sellers market, I tried to save a few bucks by going with Redfin. My house languished on the market for months until they basically told me to lower the price or take it off the market.

By contrast, while working with Brandon and his team, I got the house into selling shape (about the same as the previous year), it went on the market, I had four showings on the first day and had an offer over asking that same day. I moved out a month later, when I wanted to.

And he's not pricey. He came in at industry standard rates or lower.

I met him through a friend who'd used him as a buyer. She told me that in a super-hot sellers market, he got the price down AND got the sellers to make some repairs. This was a time when any trash heap in Denver was selling within 20 minutes of going on the market, with competing offers that drove prices up. That's the story that inspired me to hire him, and I have no regrets. I'll keep recommending him to my friends.
Like

Manager of Purchasing Risk and Treasury Operations
I have been a property investor for over 20 years and in 4 states so I have worked with my fair share of relators. Working with Lana and her team was by far the best experience I have had. I normally feel the need to helicopter most deals but when I gave the listing to Lana I never once felt the need. Her experience shined through and for the first time I felt completely protected and she brought the best deal possible. If you are realtor shopping contact them and shop no further.

Retired US Air Force
Lana has engineered 6 different real estate transactions for me in the Aurora, CO area, all with me living elsewhere! She is the most attentive and complete Realtor I have ever dealt with. She would have a list to show me, I'd fly into town, spend the day looking, and nearly always make an offer before heading back to DIA. She treats each client as if you are her only client! She has always found me the tight price to buy and the bast price to sell! Bottom line, Lana is the absolute best Realtor I have ever worked with! You won't go wrong with Lana as your Realtor!

Retired US Air Force
Land has handles at least 5 both sale and purchase condominium transactions for me in the Aurora, CO area over a period of several years! There is no more dedicated Realtor than Lana! She works harder for her clients than anyone I've ever known! Lana is simply "The Best"! I heartily recommend her to handle any real estate transaction that may present itself!

The dream team of house purchasing. They will bat for u to get the best offer or make yours the best offer if you’re buying. They have access to nationwide mortgage companies with variety of rates and offers that fit your personal situation. I couldnt get a better service and help in my purchase. The team will make sure no detail is missed. You need experts to help you.Thank you!

Brandon made the whole home buying and selling experience as easy as possible. He listened to what we wanted and helped us find the house of our dreams! I would definitely recommend him to others.

Brandon was great to work with. He did not go over our price point and was knowledgeable about the market. He also knew a lot about how much various home improvements would cost. He always came with a smile on his face which made looking at the numerous houses much more enjoyable.

I am vary happy with my Reltor Brendon , thanks for being their for me to purchase the house. I do appreciate your patient a long with the knowledge that you have. I do recommend you for those who need help like me.
I thank you and your team.

Seriously one of the best experiences I have had. Very kind and forthcoming with all the information and steps. Quick and precise. Very happy. You wont be disappointed if you go to Lana and Brandon.

Lana and Brandon are amazing! We were able to sell our property quickly and painlessly for an amazing deal. They are professionals in every sense, and worked above and beyond to help us through the whole process. I recommend them wholeheartedly to any and all looking for a premier real estate selling or buying experience.

Brandon and Lana work hard for their clients to make sure that their real estate transaction goes smoothly. They are very knowledgeable about the marketplace and always do the right thing!

Lana and Brandon are great realtors and great people. Very professional and hard working. I highly recommend them.
Show More

You will no longer receive recommendation requests from Brandon & Lana Rossell