Mr. Davis is the perfect person to have in your corner when going through the loan qualification process. He was respectful of my time, always courteous, and very knowledgeable. I owe my new found happiness and home to Mr. Davis. I recommend using Amerifirst for your mortgage or any other type of loan.
★ ★ ★ ★ ★ 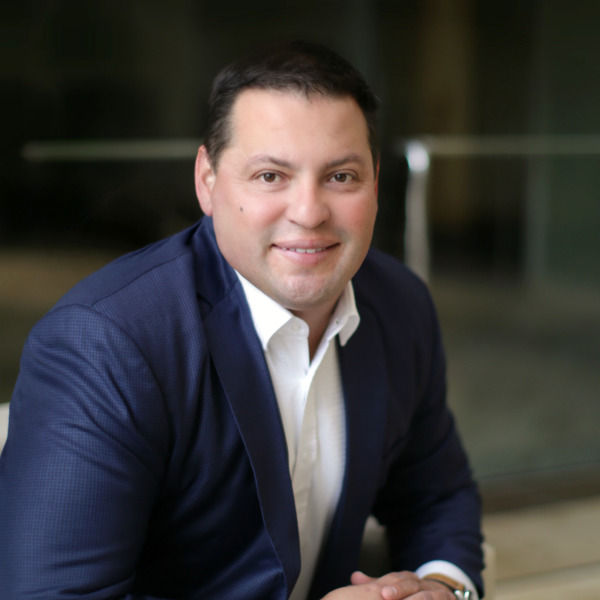 Branch Manager - Certified Mortgage Advisor AmeriFirst Financial, Inc. NMLS 335997, AZ Lic. 0930609
Rob began his career in the financial industry in 1998, beginning as a stock broker before delving into the mortgage business. He has since built a practice on transparent communication and servant leadership, racking up over 20 years of experience in Residential and Commercial lending. Today, he serves as Branch Manager for AmeriFirst Financial, Inc. with his priority not only to fulfil homebuyer’s dreams, but also to treat them as part of the family. Outside of the office, Rob spends his time coaching his son’s flag football team, and cheering alongside his daughter at the occasional GCU Men’s Basketball game.

★ ★ ★ ★ ★
Rob and Veronica were professional and knowledgeable in helping me with my home refinance.
One area I did like about this refinance with AmeriFirst, in comparison to other mortgage/refinances I have done, is the document requests come in smaller groups. I prefer it to a list of everything that will be needed coming at one time.
Thank you again,
Scott

★ ★ ★ ★ ★
Rob Davis and his team made it happen! In just a short time, we had our pre-approval to make an offer on our dream home. Once we secured the offer, Rob and his team worked with us to get everything done from 1500 miles away. Rob walked us through the process and was always willing to take our phone calls when we had questions. Thank you Rob for making our dream come true. We truly appreciate all you did working with us in purchasing our new home.

★ ★ ★ ★ ★
My wife and I were first-time home buyers and didn't know where to start. After our initial contact with the Davis team we could tell that it would be a promising experience. They held up and even extended that expectation in many areas and were clear and timely in all communication and steps of the process. Thank you Davis team for making our goal of homeownership a reality!

I would recommend Rob Davis to anyone who is looking for a refinance on their home. Him and his team are very kind , helpful,and quick at work .

Retired
★ ★ ★ ★ ★
To say this was an experience would be a gross understatement.I really had no idea what to expect from the process of applying for a Reverse Mortgage. It seemed every time I turned around something else came up. Rob Davis and his staff were fantastic. Each time I had a question they walked me through it making sure I understood. Rob and/or his assistant Sara Kirk always got back to me in a timely manner. Sara, bless her, was always understanding and supportive when I would get frustrated.
I cannot thank them enough or recommend them highly enough.
Thank you Rob Davis & Sara Kirk;
Clayton

★ ★ ★ ★ ★
Rob and his team were great to work with and helped us through the loan process.
They kept us informed every step of the way. I would use them for all of my future home loans.

★ ★ ★ ★ ★
Rob and his team were eager to help me finance my home. I did go with another lender before I found them and I was much happier with AmeriFirst.
They keep you informed of what’s happening and it seems like a lot of paperwork but they stay on top of everything for you. I am recommending my son to buy with them and my agent Debran Collins.

★ ★ ★ ★ ★
Rob was very professional and responsive at all times.

REALTOR
★ ★ ★ ★ ★
I have used the Davis Team for financing my real estate clients for a couple of years with great satisfaction. I recently had the opportunity to personally utilize his team/services, and I couldn't be happier!

★ ★ ★ ★ ★
Rob and his team did a great job for us! We have used them twice now, and have been very happy. They are timely, flexible, and very professional. We will definitely use them again!

Home Owner
★ ★ ★ ★ ★
Rob and his team did a fantastic job for me in refinancing my home mortgage. It reduced my monthly payment and eliminated my PMI. It took less then 30 days from application to close. I recommend Rob and his company to all my family here in Arizona and to my friends as well.

★ ★ ★ ★ ★
This recommendation is long overdue, but fortuitous since I have wanted to do this ever since the first of the year. A little background on my effort to refinance my mortgage: When my wife and I bought our house in Mesa about 5 years ago, she was living in Lake Havasu City at the time, and knew of a broker there. We used that brokerage to finance the house. Things went reasonably well with that, and so when we decided to refinance in 2020, we used the same brokerage to refinance. That was a big mistake. We had nothing but trouble with this brokerage and the agent they assigned for this refinance. The agent would rarely call me, but relied on texts and emails instead, which I don't do too well with as a rule. We were to sign documents electronically, which I told her that i did not want to do, but they insisted. To make a long and sad story short, I ended up firing that agency just before we were to close. I had had enough.

I then contacted the real estate agent that we bought our house with, and he recommended Rob Davis with Amerifirst Financial. Due to my prior experience with the agency in Lake Havasu, I was very firm with Rob and his people on how I wanted this refinance to go. No electronics, and I want the agent to either come to my house, or we would go to her office to sign. I didn't want to do anything by mail, let alone email. I would be willing to do phone calls, but preferred in person visits. This of course was during this Covid pandemic. His agent, Sara (last name escapes me at the moment) could not have been more responsive and cooperative. It was the difference between night (lake Havasu) and day (Rob Davis and company). I was astounded by their cooperative attitude, attention to detail and expeditious service. I am not easy to please, particularly with my previous experience, but I could not have been more pleased with Rob's company. Further, and especially due to the number of refinances that his company was doing, the "after-the signing" process really impressed me. Rob sent a congratulatory letter on the refinancing, telling me that he is there for any questions or issues that I had, or would have. He also in time sent me a very nice note along with a wooden cutting board with our last name on it, and lastly, but not least, he had sent another note along with a little box of candy to thank me for using his firm. Oh, by the way, I saved several hundred dollars using Rob, instead of Lake Havasu!!

Would I recommend Rob Davis and his company? Absolutely!!!

retired
★ ★ ★ ★ ★
Rob Davis was recommended to me by 4 different people who spoke very highly of him. I was very pleased with him & his assistants as they all did a fabulous job.

Weld Inspector
★ ★ ★ ★ ★
Rob and Sara were very knowledgeable and professional throughout the entire transaction. Any issues or potential issues that arose were dealt with swiftly and with little inconvenience to me. Thank you for all your hard work Rob and Sara!

Project Manager
★ ★ ★ ★ ★
Rob made our home buying process so seamless! I've never worked with a company that has been so incredible and easy to work with! AmeriFirst Financial really puts you as the customer first!

VP of Operations
★ ★ ★ ★ ★
Best in class experience! AmeriFirst Financial has treated us with white glove service throughout our home buying process, we can't say enough good things about them! Every step of the way they have been there moving things forward for us! After purchasing many properties, this by far has been our best experience and we will only use AmeriFirst Financial in the future! The staff is kind, knowledgeable and persistent!

★ ★ ★ ★ ★
Thank you for the outstanding job you did for us Rob.
We will Recommend you to our friends who need refinancing or looking for a new home.
We appreciate your professionalism, and all the hard work you put forth to make this happen for us.
Thank you .
The Hartleys

★ ★ ★ ★ ★
I highly recommend Rob and his team. They are awesome and made my refinancing so easy
Thank you!

GM
★ ★ ★ ★ ★
Rob Davis and Sara kirk and their team were very professional and knowledgeable and did an amazing job in completing my REFI in a timely and efficient manor.. Will definitely work with them again in the future.

GM
Rob Davis and Sara kirk and their team were very professional and knowledgeable and did an amazing job in completing my REFI in a timely and efficient manor.. Will definitely work with them again in the future.

Customer
★ ★ ★ ★ ★
Rob and his team were very professional and efficient! It was a pleasure and very low stress doing my refinance with them. I would and will recommend them to anyone!

★ ★ ★ ★ ★
Rob was outstanding! He was
Quick to reply and recommend the best options for me. I almost didn’t refi thinking I couldn’t make it work and he did it flawlessly! Thank you Rob and team!!!

★ ★ ★ ★ ★
Rob & his team made my refinancing a very smooth & rewarding experience! After coming across high fees & cumbersome paperwork with other companies, it was very refreshing to find Rob; his fees are extremely reasonable & the paperwork uploading/signing was seamless. I’d definitely recommend Rob & his team!

Office Manager
★ ★ ★ ★ ★
Everything went very smooth and I felt like I was kept up to date as the process progressed. Rob and his team made sure we were educated and understood the decisions we were making. Great experience!
Show More

AmeriFirst Financial, Inc., 1550 E. McKellips Road, Suite 117, Mesa, AZ 85203 (NMLS # 145368). 1-877-276-1974. © 2021. All Rights Reserved. This is not an offer to enter into an agreement. Not all customers will qualify. Information, rates, and programs are subject to change without prior notice. Not all products are available in all states or for all loan amounts. Other restrictions and limitations apply. AmeriFirst Financial, Inc. is an independent mortgage lender and is not affiliated with the Department of Housing and Urban Development or the Federal Housing Administration. Visit https://amerifirstloan.com/pages/state-licensing for all state licenses information. Visit NMLS Consumer Access at https://www.nmlsconsumeraccess.org/

You will no longer receive recommendation requests from Rob Davis