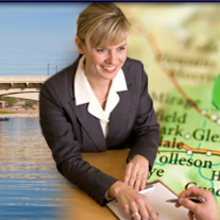 Security Title offers our customers the very best and most complete service in title insurance and other related escrow services.

Our professional staff is widely recognized for the depth of knowledge and experience brought to each transaction. Our commitment to customer service is exemplified by our constant refrain: “Attitude is everything.” With 40 offices located throughout Maricopa County, Security Title is the premier choice in Arizona’s escrow and title insurance industry.

Gina and her team at Security Title are the best of the best!! They make things straightforward, easy to understand, and will help with any questions or problems that arise! I will never use anyone else!!

Gina and her team exceeded my expectations again. Their proactive communication and willingness to tackle and solve any escrow hiccup is the service I've come to expect and count on. I am so lucky to have found Gina Cole and Security Title... Well that might be the wrong way around, thank you Susan Cunningham for finding me and introducing me to Gina and Security Title.

Kelly Silva is top notch in her field. She is extraordinarily responsive and professional. I appreciate the fact that I can rely upon her to make my transactions smooth.

Jared is fantastic. Despite all the challenges in today's world , he got it done efficiently, timely and professionally. I would wholeheartedly recommend him.

Jared was extremely polite and professional and helped me with a title commitment above and beyond what was necessary. Highly recommended.

Another professional, smooth, on-time closing with Gina Cole and her team, Having another fabulous customer service experience with Gina just strengthens my commitment to working with her and Security Title moving forward. She truly is amazing and takes great care. I feel so lucky to have Gina, Susan Cunningham and Security Title on my team, You make my job easier. Thank you

Kelly Silva and her team are amazing every single time! They are always my first choice when writing a contract.

Kelly Silva has been excellent to work with. I am very pleased with her communication and timeliness. I would highly recommend her.

Jared is a pretty cool dude. On top of his game couldn’t see myself with anyone else! Thanks Jared

Jared was an absolute professional with resolving a Title Policy correction! He provided prompt and detailed service. I would highly recommend for all Title and related service needs :)

Great Service! Security Title has always been my primary choice.

Jared was super kind, patient and empathetic with my situation and seemed eager to help give it a push start toward completion!

Great team and I always look forward to working with Kelly and Trina.

Gina and her team are rock stars! She never let's changes or hiccups affect her professionalism. She goes above and beyond each and every transaction. She actually came in on a Saturday on a holiday weekend to get the deal closed on time. Thank you Gina and Team!

Mr. Jared Radden contacted me regarding a document requested by our lender to complete mortgage refinance paperwork. He explained the reason for the request, that the request does not change any terms of our loan-only verbiage. He went on to explain how the signing process would work and that a notary would be sent (at no charge) to our home, at our convenience.

Unrelated to the topic of Mr. Radden's call.....I had just spoke to the lender OneAZ twice in two days regarding the first payment due on the refinance. I was being charged late fees as the direct payment request submitted to OneAZ by Security Title (on our behalf) was not on file with OneAZ. Mr. Radden confirmed that we had signed the request which was forwarded to OneAZ with the original package of documents.

I then again called OneAZ and explained the situation. I also used a second phone to simultaneously call Mr. Radden who helped me explain the situation to Alba (a OneAZ employee). Mr. Radden then resubmitted the form to OneAZ mortgage department asking them to address the situation.

At the end of the day Mr. Radden called again to assure me that OneAZ is now aware that the documents were forwarded to them on time. Mr. Radden had shared with OneAZ my concern of both late fees and having our credit impacted by paying late. Mr. Radden also emphasized our request to have the autopay feature established for the January payment.

Mr. Radden was civil and respectful, treating our situation with empathy and understanding. He responded promptly and accurately, conveying our concern.
He made the information in question accessible to me and to the lender.
Mr. Radden proved he was the expert and showed excellent service skills.

Thank you Mr. Radden for taking our concern seriously while keeping a positive attitude. The extra time and energy given to communicate with OneAZ , on our behalf, is greatly appreciated.

I would recommend Jared to any of my family or friends, he is very professional and will go the extra mile to assist you. I couldn't be more grateful for the assistants Jerad provided during my refinance. He was definitely a pleasant new acquaintance.

I have closed a fair amount of transactions with Kelly Silva. She is always my first choice when I fill out an offer. Kelly is fast to get back to me regardless of the level of importance. Kelly is easy to communicate with and there is never a lack of understanding about what needs to get done. Hands down she is my number one.

Being from Northern Arizona, I was worried that I would not get great service and it turns out I was wrong. Kelly Silva was easy to work with, answered her phone every time I called and returned emails immediately. Great service!

Kelly was very professional, experienced and timely. She did a Great job!!

In assisting with the sale of my property, Jared was timely, professional, knowledgeable, and performed without a flaw.

Gina is an incredible personable solution oriented amazing person to do business with! I first engaged with her after she was recommended by the other side of our transaction that she was involved in. I look forward to utilizing her services in future transactions. She has an an awesome upbeat mannerism that projects clearly thru phone conversations! I have yet to meet her and will welcome that time! It is so important to extend that extra kindness and "can do" attitude and she shines! Above and beyond customer service! She is a model for professionalism and making you know that you matter to the transaction and she is there to make it as smooth and efficient of a transition for all involved!

Gina is simply the best. I�ve said it about a hundred times and I will say it about a 1,000 more .
Show More