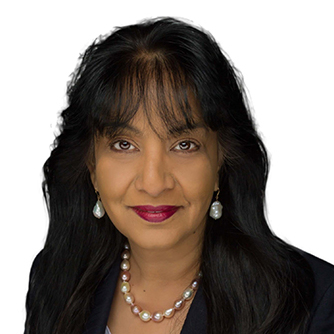 VP | Business Development Manager IPX1031 Southern Member of the Florida Bar and the District of Columbia Bar
Along with a law degree, Sangeeta brings over 14 years of combined 1031 and title experience, allowing her to provide informative education and comprehensive solutions to meet growing demand in the 1031 sector. Sangeeta is based in Sunrise, Florida and offers strategic 1031 exchange consultations, continuing education seminars, and focuses on all aspects of business growth and development throughout South Florida.

Sales Associate
This was by far the best Real Estate class I have ever taken. Sangeeta was very clear, the thread of what she was explaining was easy to follow, everything made sense, and she gave me a great deal of confidence in her knowledge of the information and so she will receive my highest recommendation as QI for any 1031 Exchange customer.

Many thanks for time well spent!

Sales Professional with BHHS Florida Realty
Sangeeta Banerjee's presentation was excellent. There are a lot of pieces involved in a 1031 exchange and it good tp know that we have access to such knowledgeable partners. I was not aware of some of the new regulations. I am glad that the presentation was forwarded so that I am able to read it again at my own pace.

Realtor/Property Manager
I have over 30 years of real estate experience and have used a variety of 1031 companies in the past. Simply put, no one compares to IPX1031. This company is extremely knowledgeable, professional, prompt and courteous. It knows the business inside and out. They are also accessible, and are never hard to reach.
I have had very complicated situations with foreign clients and they have handled all issues for me from beginning to end They will make your life easier. Just turn it over to Sangeeta Banerjee and she and her staff will get the job done. A breath of fresh air in the complicated 1031 field.

Sangeeta, Judy and Machelle were the 1031 team for my recent 1031 exchange. What should have been a simple delayed exchange transaction became difficult and complex because of some problems related to the lender and closing agents for the buyers of the relinquished property. The 1031 nature of the transaction was at risk at several points, and the possibility of having to convert the exchange to a reverse 1031 arose at least twice -- once with only a few hours remaining until closing. As each crisis arose, Sangeeta, Judy and Machelle reacted professionally and expeditiously, preparing to handle the matter however the pieces would fall. Although there were several times when concluding the matter looked impossible with the time remaining, the Sangeeta, Judy and Machelle never once said "we can't do that", or, "that won't work". Each time their response was "we can do that". They were available 24 X 7 to advise, guide and take whatever action was required to make the transaction work. Their knowledge of the IRS requirements for each step of the transaction was of tremendous value. For anyone considering a 1031 exchange I most strongly recommend the Sangeeta - Judy - Machelle team at IPX.

Realtor
I'm very pleased to recommend Sangeeta and Alexis, I sold a property and they did the 1031 Exchange, it was a smooth transaction from the beginning to the end, they're very professional and they know what they're doing. What I liked the most about Sangeeta and Alexis was their promptness with all my questions and concerns, I did not have to waste time with me doing the follow up, they answered their phone and emails and when I left a message they called me back right away....that promptness is very rare nowadays.
Great service!

Real Estate Sales Associate
Her class was great! A lot of information. She has a really good knowledge about the class. Thank you!

President
We had a video conference on 1031 with Sangeeta and the Miami-Association-of-Realtors.
I have attended several trainings on this topic and this has seemed to me that I deal with the different topics, clearly and with excellent knowledge of the topic.
She made her presentation in Spanish (she speaks it very well!) And surely she does it excellently in English, too.
I repeat, excellent!
Rafael OMAR Jimenez

Realtor Associate
Sangeeta is an excellent teacher. The class was very well explained , with a lot of examples, the two hours went really fast, but she could include all the material she had.
I would take it again. Her spanish is very good and the class clarified a lot of questions that we had with our international clients.
Thank you Sangeeta for your time

Sales Associate
Great presentation with lots of useful information. Very interesting and detailed explanation of the exchange process and specific constraints. Highly recommended for realtors who can have an opportunity to work in 1031 Exchange.

Licensed Title Insurance Agent
I have worked for many years with Sangeeta Banerjee and ipx1031 Exchange. The professionalism and knowledge they offer is by far the best of any other exchange intermediary. They are highly trusted representatives and they will carry the transaction from beginning to end, or even if it is just a few seconds before the closing they will take on the transaction and assure every detail is handled with the utmost of professionalism.
Our firm highly recommends ipx1031 Exchange.

Realtor Agent
Sangeeta taught the tax deferral strategies course and she broke it down so I understood all the rules and regulations. Thank you for taking the time to educate us.

Realtor
The class was full of information,and Sangeeta did a great job presenting it. As a newer agent, this the kind of information that is important to me. Thank you.

Realtor
It was a fairly complete presentation, very detailed, giving me a better understanding of 1031.
I will take another class

Realtor Associate
Thank you so much for a very clear and informative presentation.

Florida Bar Board Certified Real Estate Lawyer
Sangeeta is very responsive and always available to answer questions I have with respect to my foreign clients and 1031 exchanges. She has helped my clients many times over the years and involving Sangeeta and her team in my transactions is seamless.

Realtor with Berkshire Hathaway HomeServices
This was a great class and also very informational. Sangeeta Banerjee was an excellent commentator and she really knew her subject!

Realtor
Was excellent! The 2 hours flew by! Webinar was Informative and Sangeeta used real life experiences which made understanding the concepts much easier!! Thank you.

Realtor
Very productive seminar. I have attended 1031 sessions in the past, and this was by far the easiest to understand. Great Job!

Realtor
Sangeeta was extremely knowledgeable and easy to understand. Thank you for teaching this class.

You will no longer receive recommendation requests from Sangeeta Banerjee, Esq.